The site is a dry river bed during a drought. This work is like an offering to the gods of rain. I am playing with ideas of value and worth, using humble moss and concrete alongside precious gold.  At the end of the day the missing element is the most precious one of all – the water that should be running freely down the creek. 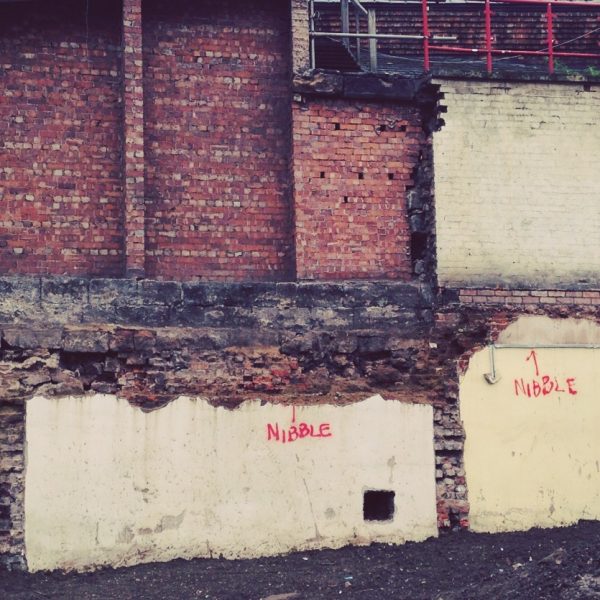 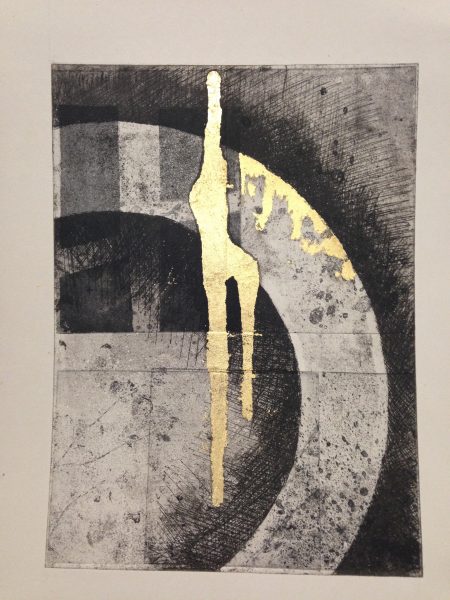 Sophy King works in both the urban landscape and the natural world.  Site-specific permanent public art installations are approached with integrated social, ecological and historic research.  Her large-scale Public Artworks can be seen in London, Cornwall and Leeds.  Looking for a deeper understanding of environmental systems, processes and phenomena in relationship to social concerns and regeneration, her work is concerned with the relationship between people and their environment.  Participatory work involves temporary events and installations that allow people to inhabit artwork and make connections to their space and each other.

The sculpture sits in a clearing in 500 acres of forest in Connecticut USA, the site of a vernal pool.  Rehabit was my first project to be completed during my residency at I-Park.  Recycled doors are cut into letters and covered in moss.  The site is a vernal pool and as the doors slowly rot down they form a new habitat for the moss, fueling a cycle of growth and decay.  The concept of rehabitation links into my research on regeneration in cities, and the word REHAB has so many negative connotations I though it was interesting to site it here; within such a natural, wholesome environment.  The relationship between ‘natural’ and ‘manmade’ is at the heart of this piece. 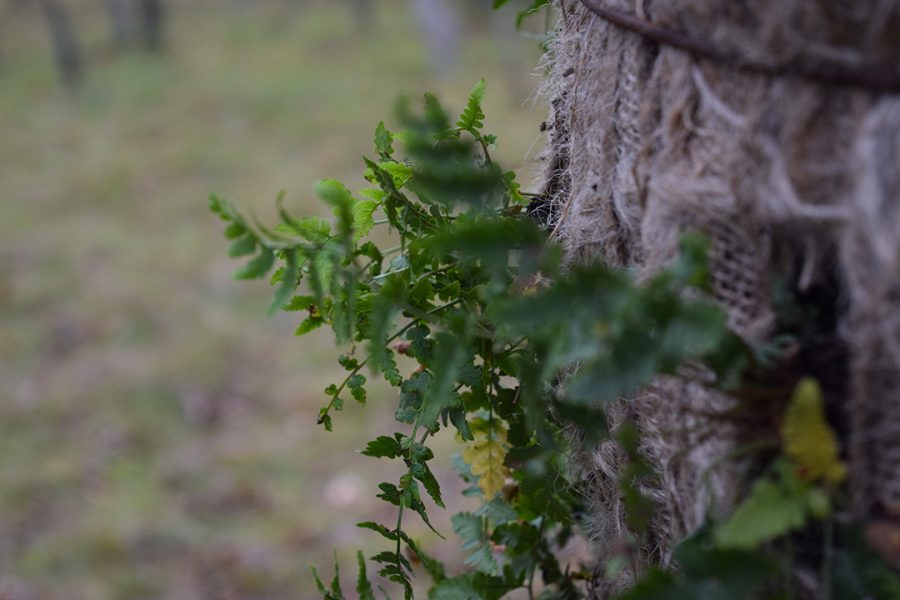 The sculptural form of the incubator cages (in this case a tower) protect young native beneficial plants.  As the form breaks down, the plants take over and begin to colonise the site, improving biodiversity.

In this case the introduced plant is the Marginal Wood Fern, Dryopteris marginalis.  The project can be expanded to take on different typologies; meadow and marshland as well as woodland.

DNA sculpture from the first floor

The sculpture represents a strand of D.N.A. It’s dynamic shape animates the space for the transient population of patients and visitors who move through the building. As a representation of DNA it conveys a further layer of meaning to the hospital staff who use the building daily.

The spiral implies growth and dynamism. This basic geometry is something we relate to instinctively; it’s around us all the time on every scale from D.N.A. to a fern leaf to a galaxy.

Four elements represent the four bases that comprise D.N.A. The cubes are made of stainless steel, oak, glass and slate.

The interplay between these materials creates visual interest. The metal reflects, glass refracts, wood and stone absorb the light. They also have contrasting textures, the metal smooth, hard and cold; the stone rough and cold, the wood soft and warm, the glass silky to the touch.

The whole is strung on tensile cables reaching 6m from ceiling to floor in the front lobby of the building. 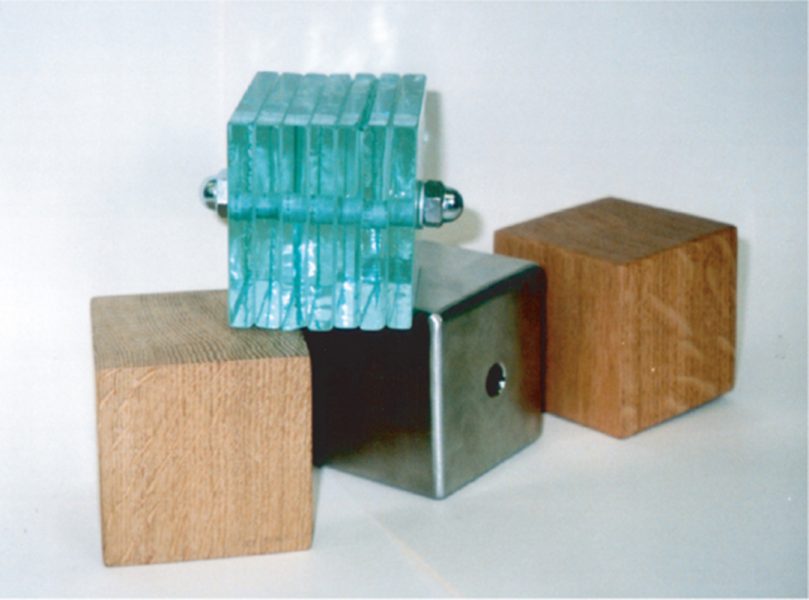 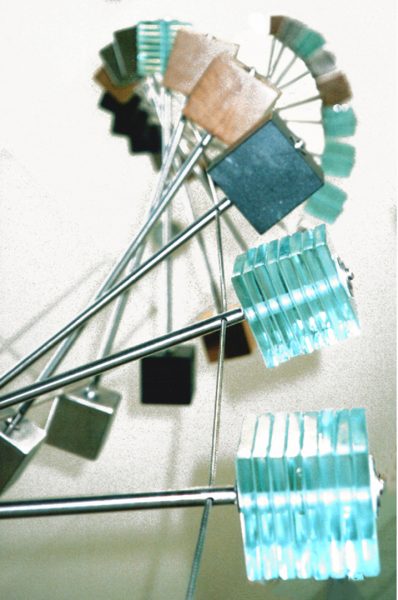 Showing the spiral effect from the ground level

Native plants grown into felt and mounted on board

This meadow is fully mobile and can be set up in various incongruous urban settings, guerrilla art style.  It alludes to conservation, sustainability and the control of nature.  Here it is presented at ArtWork Atelier as part of the Manifest Festival 2015.

What is natural and what is manmade?  I am interpreting the mechanics and reality of what is a managed landscape and what is a natural one, recognising the incoherence between popular perception and reality. The truth is that what most people recognise as ‘natural’, the British countryside, is the product of thousands of years of human management. Here is a meadow, obviously ‘artificial’ and yet no less natural than one in the rural landscape.

Man imposes a geometry, an order, on our environment for our own purposes. In the end nature takes possession of it, creating the Great British Countryside. What we end up with is a balance between control and chaos.

What we initially create can become an ecosystem, benefitting animals and plants. which in themselves loop around to enrich our lives. There is no reason why we can’t bring these benefits to the heart of a city via green corridors, green roofs, and sustainable drainage systems. A meadow on a building site, or a car park, or on a roof can bring pleasure and ecological improvement.

The work references the concept of ‘Hedonistic Sustainability’ espoused by the Danish architect Bjarke Ingels; there is value in the process of human pleasure, conservation can not only benefit the environment but at the same time can enhance quality of life and human enjoyment.

Birds of Passage is an LED Board commissioned by the RSPB for their sculpture trail at Fairhaven Lake, Lancs.  The board is programmed with animations, information and live updates.  The area is one of the most important estuaries for migratory birds in the country and Birds of Passage acts as an arrivals board, telling visitors what species are in the estuary and where they have come from.

The sculpture was selected from open competition and through consultation with local people. The commission included workshops with local children, talks and displays to involve and give ownership to the local community. It is situated by the river Tamar in the Millennium Park, built on a landfill site, including artworks, designed seating and railings and a BMX track. I also mentored a local artist during all phases of the commission.

The sculpture is a symbol of regeneration. It takes its inspiration from the Brunel Railway Bridge which can be seen from the site. It is made from sheet aluminium fins, slotting onto a central axis and bolted at each end.

The fins have glass magnifying lenses set into portholes along their length to distort the landscape. The idea is to visually link the surrounding area to the sculpture directly, while giving the local viewer a new perspective on their home, and on the ex-landfill park through the distortions of the lenses.

The aluminium fins which comprise the sculpture were milled at the nearby Devonport Royal Dockyards.

We used state of the art technology, more normally used to make components for nuclear submarines.

This process echoes the technical excellence and industrial prowess the area was famous for during the Brunel era.

The ‘flatpack’ sculpture was then assembled on site over a week.

The whole piece is then tightened up using 80mm nuts

Commission for Bethnal Green Housing Association, the frontispiece for a new housing development.

Mile End is a diverse multicultural area, this informed my approach to the design, and my proposal was chosen by popular vote by the residents of the area.  The monolithic sculpture is the gnomon to a sundial laid out in the cobbles around it.

The Sundial evokes the connection between the earth and the sky. It reveals changing atmospheres, the rhythm of the days and months. It reinforces the viewer’s relationship to the seasons within an urban, anthropocentric environment.

During workshops in local schools we made sundials and orreries, exploring concepts of Time and Space.

The Reach Art Project was a programme of artist-led public engagement devised to tie in with my commission for landscape designs for the regeneration of the promenade at St. Anne’s. A second artist, Sarah Jane Richards, was commissioned to design signage for the stretch and we collaborated on the public engagement side of the commission. We provided 16 different workshops, engaging a total of 335 people in the sessions.

We worked with 3 mainstream local primary schools, both in the schools and outdoors at a local park scheme ParkView4You. We also worked with Red Rose School which caters for the needs of vulnerable children between 8-16 with Specific Learning Disabilities. As a result of these sessions the children were able to exhibit their work publically at St Anne’s Swimming Pool (which was a focus for the regeneration plans). We provided sessions as well for the Fylde Sharks and Otters Disability Swimming Clubs, which swim at St Anne’s pool.

We delivered a series of drop-in workshops at various venues to engage the wider community in photography, drawing, artist’s bookmaking, kite-building, chalk street art and knit-and-natter sessions. In these sessions we explored the heritage of the area, finding out what made it unique and what people cherished about their town. We used two strategies; the bookmaking and photography projects for instance were explicitly focussed on the town and its history. Other sessions were more about having conversations, we found that crafting alongside each other allowed people to open up and reveal their character and priorities.

To celebrate the project we ended up putting on The Reach Art Festival, attended by 800-1000 people. There was an art market, bands, Punch and Judy, a storyteller and even a mini double decker for rides.

The designs and concepts which were inspired by the project are now with Fylde Borough Council who are planning to implement them as part of the Fylde Coastal Plan in the next 5 years.